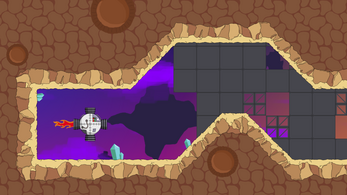 A truly addictive but equally frustrating game, Vacuous is a minimalistic action/puzzle game for Windows PC. Featuring an original soundtrack by ZABIE. The game is available right now over on itch.io for just $5.

The main aim of the game is to use thrusters to make fragile bombs dance through obstacles, whilst suffering the consequences of physics. Each stage throws up increasingly challenging obstacles to maneuver your bomb through in order to blow up mind control machines in an attempt to save the galaxy.

Vacuous is the creation of @JMRante whose inspiration for getting into game development comes from the video game classic, Super Mario 64. To find out more about him and how Vacuous came to be, continue reading below for my recent interview with him.

Q Are you a full-time developer? If not, what do you do?

The dream is to be a full-time dev, but I’m not one at the moment. I’m fresh out of college working a 9-5 programming job.

Q What is your earliest memory of playing video games? What was your favorite?

Some of my earliest memories of video games come from playing Super Mario 64 at a kids play area in a grocery store. Weird times.

That game is what inspired me to become a game dev. The mystery of the castle, the 3D world, the sense of exploration and possibility. Q How did you get into game development?

When I was five or six I started dreaming about games that didn’t exist, or expansions of games that did, and started to draw what I saw on paper.

I had no clue at the time how to create games, it was simply magic to me. I found MSPaint and started to draw level outlines with it. From there I started using level editors from my favorite games.

At age eight I discovered Clickteam’s Klik’n’Play through the Commander Keen fangame scene, and started to learn from what people were making with that engine.

Soon after I discovered Game Maker (maybe version 4 or 5) and started to learn programming and art.

Q Is this your first game? If not, tell us briefly about your best game to date.

Vacuous is my first commercial game, and definitely the largest game I’ve made, but I have released plenty of smaller projects in the past.

I would hope Vacuous is my best, considering the work I put into it, but it isn’t perfect. My other favorite is The Pac-Man, my poorly, poorly titled fangame project I made between high school and college.

It has lots of cool mechanics, plenty of neat environments, and some weirdness. Very polished for how lacking in skill I was at the time. I was trying to capture what I thought was so good about Pac-Man: Adventures in Time, an obscure PC title that I felt did Pac-Man best. I feel I got close. If you work on a game long enough, you should get sick of playing it and seeing it.

Q Tell us a little about Vacuous and where the inspiration for the game came from.

Vacuous is so hard to describe even though the game itself is so simple. You move a ship around with four thrusters. If you touch the walls, you explode. You need to steer it into the mind control machines and blow them.

Vacuous is based on a game I made for a high school physics class called Vacuum and Force. That title was made over a weekend, but it was the first complete game I had made that I was really proud of and thought was fun.

The more I thought about it, the more I wanted to do a true expansion on its ideas. I experimented with a 3D sequel, where the player actually controlled six thrusters, two for each axis.

It was impossible to play, judging the depth of the ship and adjusting the 3D velocity with 3D acceleration in that way. I even tried a 3D version in VR with the 1st Oculus Rift dev-kit to solve the depth perception issues, but it did not work. Q How many were in the team developing Vacuous and who are they?

I did everything but the music. For the music, I brought on Joseph Elliot of ZABIE. He did a great job creating the Genesis-y space vibes I wanted for the score. He also put up nicely with my horribly bizarre and erratic development schedule.

Q Why did you choose to use GM:S for this project?

GM:S was a cheap, 2D focused engine that I was already very familiar with. Knowing much of the GML library of functions is a huge benefit.

Not yet, but I love what I’ve seen so far of the slick interface and room editor!

Q Aside from GMS, what other software are you using?

I’ve used Unity for some projects. Powerful, but not always my favorite. I use GIMP mainly for creating art assets and Audacity for creating sounds (something I am not good at).

I’ve rotated through a whole bunch of text editors: currently I am using Sublime Text. I wish I was cool enough to handle vim or Emacs. I use Blender for editing video.

Q What does your hardware setup look-like? Someday I hope to add a piano keyboard. I’m a fool who develops on a near top-of-the-line gaming PC.

Q What platforms is Vacuous available on? Do you plan on releasing elsewhere?

Currently just Windows PC. If there is a massive outcry for other platforms I’ll consider it, but I’m wanting to move on to my next project.

Q What top tip do you have for aspiring game developers getting started with GameMaker?

Start small, finish, go a little bigger, finish, and repeat. Game Jams are a good way to build this discipline. Play lots of amateur games, look at how they are made. Take school semi-seriously and learn. For game dev, all knowledge pays off!

Immerse yourself in the gaming world, but also follow other pursuits so you can find unique inspirations. For Game Maker in particular, learn GML, explore and play with the functions the engine provides, and play around with other people’s projects. Shout out to Midnight Synergy and their incredible Wonderland series. I was a fan from the very first title and even became a level designer for one of the later sequels, Mysteries of Fire Island.

My favorite game of theirs is Return to Wonderland. Sokoban perfected. It is so beautiful.

In the Game Maker world, I just finished Hyper Light Drifter, which is an absolutely masterpiece in both play and aesthetic. I aspire to make a game like that.

Check out my portfolio at www.jmstark.net. The more cool people I can meet in the game dev community the better!

Vacuous is available now on itch.io for just $5.